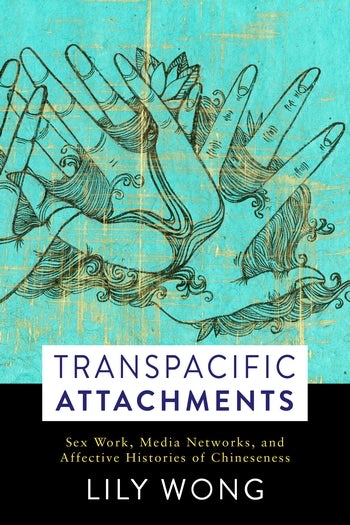 The figure of the Chinese sex worker—who provokes both disdain and desire—has become a trope for both Asian American sexuality and Asian modernity. Lingering in the cultural imagination, sex workers link sexual and cultural marginality, and their tales clarify the boundaries of citizenship, nationalism, and internationalism. In Transpacific Attachments, Lily Wong studies the mobility and mobilization of the sex worker figure through transpacific media networks, illuminating the intersectional politics of racial, sexual, and class structures.

Transpacific Attachments examines shifting depictions of Chinese sex workers in popular media—from literature to film to new media—that have circulated within the United States, China, and Sinophone communities from the early twentieth century to the present. Wong explores Asian American writers’ articulation of transnational belonging; early Hollywood’s depiction of Chinese women as parasitic prostitutes and Chinese cinema’s reframing the figure as a call for reform; Cold War–era use of prostitute and courtesan metaphors to question nationalist narratives and heteronormativity; and images of immigrant brides against the backdrop of neoliberalism and the flows of transnational capital. She focuses on the transpacific networks that reconfigure Chineseness, complicating a diasporic framework of cultural authenticity. While imaginations of a global community have long been mobilized through romantic, erotic, and gendered representations, Wong stresses the significant role sex work plays in the constant restructuring of social relations. “Chineseness,” the figure of the sex worker shows, is an affective product as much as an ethnic or cultural signifier.

I find this book engaging, inspiring, and thought-provoking. The book’s greatest accomplishments are its transpacific perspective, the focus on the subject of the sex worker, and its various theoretical approaches to lesser-known works across a broad historical span. . . . [Transpacific Attachments] is destined to be an important resource and reference. Sijia Yao, Modern Chinese Literature and Culture

This book should be welcomed by scholars in the field of Sinophone studies, Chinese studies, queer studies, and Asian American studies. China Review International

An important contribution to transpacific studies, Asian-American studies, and Chinese studies, as well as to scholarship on literature, film, and new media, Transpacific Attachments insightfully sheds new light on how the prostitute figure has worked as a symbolic medium that both produces and problematizes configurations of sexual citizenship and social mobility. Karen Thornber, Harvard University

Transpacific Attachments marshals a dazzling range of literary and audiovisual texts to unpack the figure of the Chinese sex worker and the affective politics this figure refracts. The result is a powerfully refreshing understanding of "Chineseness" as a shifting "affective structure" that defies identity politics with its familiar attachments to nation, ethnicity, and language. Yiman Wang, University of California, Santa Cruz

Transpacific Attachments elegantly and deftly traces structures of affect and sociality across the Pacific through the figure of the “Chinese” sex worker throughout the twentieth century. It offers one of the most nuanced discussions of “Chineseness” in English-language scholarship to date, registering its permutations and transformations by linking the two sides of the Pacific in their affective entanglements and disentanglements. It makes an important contribution to the interrelated fields of Sinophone studies, Chinese studies, queer studies, and Asian American studies. Shu-mei Shih, University of California, Los Angeles

Lily Wong is associate professor of literature at American University.