A Chronicle and Analysis of the Revolution of Dignity 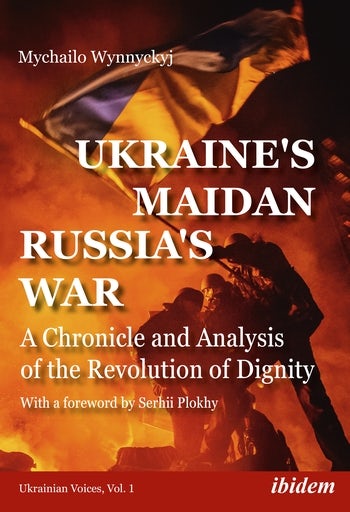 A Chronicle and Analysis of the Revolution of Dignity

In early 2014, sparked by an assault by their government on peaceful students, Ukrainians rose up against a deeply corrupt, Moscow-backed regime. Initially demonstrating under the banner of EU integration, the Maidan protesters proclaimed their right to a dignified existence; they learned to organize, to act collectively, to become a civil society. Most prominently, they established a new Ukrainian identity: territorial, inclusive, and present-focused with powerful mobilizing symbols.

Driven by an urban “bourgeoisie” that rejected the hierarchies of industrial society in favor of a postmodern heterarchy, a previously passive post-Soviet country experienced a profound social revolution that generated new senses: “Dignity” and “fairness” became rallying cries for millions. Europe as the symbolic target of political aspiration gradually faded, but the impact (including on Europe) of Ukraine’s revolution remained. When Russia invaded—illegally annexing Crimea and then feeding continuous military conflict in the Donbas—Ukrainians responded with a massive volunteer effort and touching patriotism. In the process, they transformed their country, the region, and indeed the world.

This book provides a chronicle of Ukraine’s Maidan and Russia’s ongoing war, and puts forth an analysis of the Revolution of Dignity from the perspective of a participant observer.

Many of the major trends of international politics in the twenty-first century are best seen from Ukraine. Understanding the Ukrainian revolution of 2013–2014 and the Russian invasion that followed are absolutely essential to any informed discussion of the state of the world. This book, rich in chronology, evidence, scholarly analysis, and human insight, is a major step toward such an understanding. It should be widely read by those interested in Eastern Europe, the European Union, digital war, and the possibilities for new forms of politics. Timothy D. Snyder, Richard C. Levin Professor of History, Yale University

Wynnyckyj’s excellent book is a major contribution to the debate about the tumultuous events of 2013–14. It is even two books in one. The first provides the insights and detailed chronology of a well-grounded eyewitness that have been sorely missing in most accounts to date. The second adds an analytical perspective. Wynnyckyj argues that the Maidan was neither geopolitical, conspiratorial, or material; but ideational and a ‘great’, nation-building revolution, most like the American War of Independence, and an exemplar of heterarchical identities and mobilisations of broader relevance to all students of social change. Andrew Wilson, Professor of Ukrainian Studies, UCL School of Slavonic and Eastern European Studies

Mychailo Wynnyckyj's magnificent account of Ukraine's 2014 Revolution of Dignity easily surpasses every other book on the subject and sets a standard of excellence that will be hard to beat. Wynnyckyj brings to his analysis a unique combination of viewpoints. As a Ukrainian Canadian who has made Kyiv his home, he offers the perspective of native Ukrainians. As a participant in both Ukrainian uprisings, those of 2004 and of 2014, he offers an insider's view. And as a superb scholar well-versed in Western social science, he can place the events he witnessed and made into a theoretical context that explains just why Ukraine's 2014 upheaval was of world-historical importance. Get rid of all your other books on the Ukrainian Revolution, read Wynnyckyj, and get ready to be enlightened. Alexander J. Motyl, Professor of Political Science, Rutgers University, Newark

During the Maidan demonstrations and their aftermath, I eagerly awaited Mychailo Wynnyckyj’s blog updates—they offered what engaged intellectuals can do best. He not only communicated the ‘feel’ of revolution’s possibility, and anxiety, but also helped us to appreciate the broader conditions and more general significance of this great transformation in Ukraine. With time to reflect, Wynnyckyj has lost neither of these great qualities, but in this book added another we so desperately need. He has written a text inscribing Ukraine’s place in a global history and political philosophy that moves dignity and hope to the center of our time’s narrative, even when war and violence surround. This volume, then, is not only for those aware of Ukraine’s importance. His agent-centered account also could guide those looking to develop their own knowledge activism suitable for shaping alternative futures in other parts of the world. Ukraine, and Wynnyckyj, inspire. Michael D. Kennedy, Professor of Sociology and International Affairs, Brown University

Back in early 2014, hundreds of people regularly read, examined, and shared Mychailo Wynnyckyj's blogpost 'Thoughts from Kyiv'. For the concerned contemporaries, it was a priceless source of information – a first-hand on the ground account of a truly historical drama, which opened with an inspirational and tragic EuroMaidan in Kyiv, proceeded with the Russian occupation of the Crimea, and culminated in the eastern bloodlands of Ukraine’s Donbas. By writing the Revolution of Dignity, the author allows today’s reader to relive the tumultuous, heart-breaking, and emotional story of Ukraine’s Maidan and Russia’s war. Friends of Ukraine shall find here the reason for being optimistic. Ukraine’s foes shall learn about her indestructible spirit. Vlad Mykhnenko, Associate Professor of Sustainable Urban Development, University of Oxford

Mychailo Wynnyckyj is associate professor of sociology at the National University Kyiv-Mohyla Academy (where he has also served as director of the Doctoral School) and holds a cross-appointment to Lviv Business School of Ukrainian Catholic University, where he teaches MBA and executive development courses. He was awarded a PhD in economic sociology in 2003 from the University of Cambridge. During the 2013–2014 Maidan protests, and subsequently during the early years of Russian aggression in the Crimea and Donbas, Wynnyckyj was a regular commentator for English-language media outlets and provided analysis on current events in his Thoughts from Kyiv blog. Since 2015, Mychailo has served as advisor to Ukraine’s minister of education and science. Born in Canada, he has lived in Kyiv with his wife and four children since 2003.

The author of the foreword:
Dr. Serhii Plokhy is Mykhailo Hrushevsky Professor of Ukrainian History at Harvard University and Director of the Harvard Ukrainian Research Institute, Cambridge, Massachusetts.