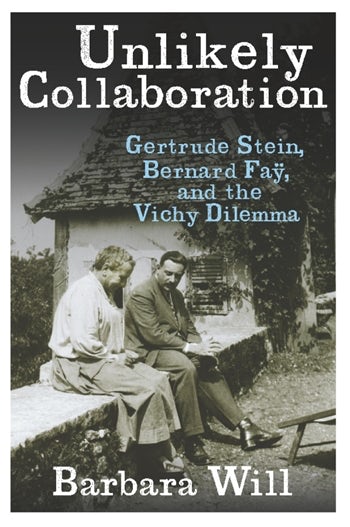 In 1941, the Jewish American writer and avant-garde icon Gertrude Stein embarked on one of the strangest intellectual projects of her life: translating for an American audience the speeches of Marshal Philippe Pétain, head of state for the collaborationist Vichy government. From 1941 to 1943, Stein translated thirty-two of Pétain's speeches, in which he outlined the Vichy policy barring Jews and other "foreign elements" from the public sphere while calling for France to reconcile with Nazi occupiers.

Unlikely Collaboration pursues troubling questions: Why and under what circumstances would Stein undertake this project? The answers lie in Stein's link to the man at the core of this controversy: Bernard Faÿ, Stein's apparent Vichy protector. Faÿ was director of the Bibliothèque Nationale during the Vichy regime and overseer of the repression of French freemasons. He convinced Pétain to keep Stein undisturbed during the war and, in turn, encouraged her to translate Pétain for American audiences. Yet Faÿ's protection was not coercive. Stein described the thinker as her chief intellectual companion during her final years.

Barbara Will outlines the formative powers of this relationship, noting possible affinities between Stein and Faÿ's political and aesthetic ideals, especially their reflection in Stein's writing from the late 1920s to the 1940s. Will treats their interaction as a case study of intellectual life during wartime France and an indication of America's place in the Vichy imagination. Her book forces a reconsideration of modernism and fascism, asking what led so many within the avant-garde toward fascist and collaborationist thought. Touching off a potential powder keg of critical dispute, Will replays a collaboration that proves essential to understanding fascism and the remaking of modern Europe.

Barbara Will's Unlikely Collaboration is a beautifully written and engaging work that illuminates the lives and works of Gertrude Stein and Bernard Faÿ, their friendship, and the fascinating and troubled times in which that friendship formed and flourished. Will's book, penetrating in its psychological, literary, and historical insights, will appeal especially to readers interested in literary modernism and its often disturbing political connections. Richard J. Golsan, author of French Writers and the Politics of Complicity: Crises of Democracy in the 1940s and 1990s

An unlikely collaboration indeed. One was perhaps America's most celebrated avant-garde writer, living in France; the other a French biographer of Benjamin Franklin turned anti-Masonic zealot and collaborator with the Nazis from 1940 to 1944. Gertrude Stein wanted to persuade Americans that the Vichy collaborationist leader Philippe Pétain was a French George Washington; Bernard Faÿ helped save Stein's art collection, and maybe Stein herself, from the Nazis. Barbara Will brings alive their association and ponders the compatibility of literary modernism with political reaction. Robert O. Paxton, author of Vichy France: Old Guard and New Order, 1940–1944

...revisited the relationship of Stein and Faÿ, offering the fullest account to date of their professional and personal ties. Eric Banks, Chronicle Review

Exceptionally well researched and elegantly written, this book is certain to make an important contribution to and beyond Stein studies.... Highly recommended. Choice

Unlikely Collaboration is a fascinating book that explores a sensitive topic with solid documentation. The Gay & Lesbian Review Worldwide

She has given us a fuller, more realistic picture of a multilayered Stein who was fairly talented, but who also, in Will's own words, was in morally significant ways a 'despicable individual.' Gerald Sorin, Haaretz

Will's most significant contribution is to challenge the assumption that an individual with a liberal personal lifestyle and/or creative interests will inherently be someone with liberal political views. Miriam Intrator, French History

Her study is a valuable and well-informed portrait of a troubled and troubling literary and political relationship. Angela Kershaw, French Studies

Barbara Will is professor of English at Dartmouth College and the author of Gertrude Stein, Modernism, and the Problem of "Genius." She has written extensively on modernist literature and culture and is a specialist on the work of Gertrude Stein.