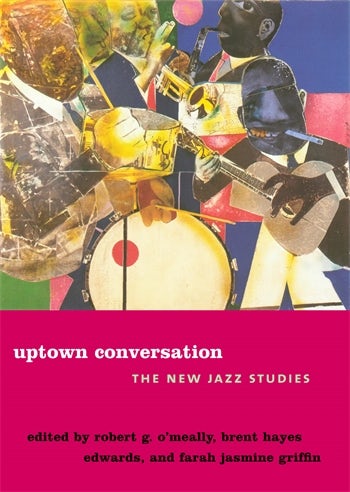 Jackson Pollock dancing to the music as he painted; Romare Bearden's stage and costume designs for Alvin Ailey and Dianne McIntyre; Stanley Crouch stirring his high-powered essays in a room where a drumkit stands at the center: from the perspective of the new jazz studies, jazz is not only a music to define—it is a culture. Considering musicians and filmmakers, painters and poets, the intellectual improvisations in Uptown Conversation reevaluate, reimagine, and riff on the music that has for more than a century initiated a call and response across art forms, geographies, and cultures.

Building on Robert G. O'Meally's acclaimed Jazz Cadence of American Culture, these original essays offer new insights in jazz historiography, highlighting the political stakes in telling the story of the music and evaluating its cultural import in the United States and worldwide. Articles contemplating the music's experimental wing—such as Salim Washington's meditation on Charles Mingus and the avant-garde or George Lipsitz's polemical juxtaposition of Ken Burns's documentary Jazz and Horace Tapscott's autobiography Songs of the Unsung—share the stage with revisionary takes on familiar figures in the canon: Thelonious Monk, Miles Davis, Duke Ellington, and Louis Armstrong.

It is also a delightful, accessible, and provocative read--a book that how jazz studies can contribute to a host of other fields. Choice

The focus and depth of these essays prove that this chorus can sing - and not just standards. Larry Blumenfeld, Jazziz

Uptown Conversation gives us that crystallized vision and is destined to become an important source of research and reflection for many years to come. Anne Farnsworth, Jazz Notes

Uptown Conversations... continue[s] this trajectory by moving away from jazz as a static object to be stylistically described, explained, and celebrated through the heroic and larger-than-life individual towards an understanding of jazz as a music in continual dialogue with the historical, social, political, racial, gendered process governing its creation. Niko Higgins, Current Musicology

The international community of serious jazz enthusiasts who pick up the book will be impressed. Theodore R. Hudson, Ellingtonia

Introductory Notes, by Robert G. O'Meally, Brent Hayes Edwards, and Farah Jasmine Griffin
Songs of the Unsung: The Darby Hicks History of Jazz, by George Lipsitz
"All the Things You Could Be by Now": Charles Mingus Presents Charles Mingus and the Limits of Avant-Garde Jazz, by Salim Washington
Experimental Music in Black and White: The AACM in New York, 1970-1985, by George Lewis
When Malindy Sings: A Meditation on Black Women's Vocality, by Farah Jasmine Griffin
Hipsters, Bluebloods, Rebels, and Hooligans: The Cultural Politics of the Newport Jazz Festival, 1954-1960, by John Gennari
Mainstreaming Monk: The Ellington Album, by Mark Tucker
The Man, by John Szwed
The Real Ambassadors, by Penny M. Von Eschen
Artistic Othering in Black Diaspora Musics: Preliminary Thoughts on Time, Culture, and Politics, by Kevin Gaines
Notes on Jazz in Senegal, by Timothy R. Mangin
Revisiting Romare Bearden's Art of Improvisation, by Diedra Harris-Kelley
Louis Armstrong, Bricolage, and the Aesthetics of Swing, by Jorge Daniel Veneciano
Checking Our Balances: Louis Armstrong, Ralph Ellison, and Betty Boop, by Robert G. O'Meally
Paris Blues: Ellington, Armstrong, and Saying It with Music, by Krin Gabbard
"How You Sound??": Amiri Baraka Writes Free Jazz, by William J. Harris
The Literary Ellington, by Brent Hayes Edwards
"Always New and Centuries Old": Jazz, Poetry and Tradition as Creative Adaptation, by Travis Jackson
A Space We're All Immigrants From: Othering and Communitas in Nathaniel Mackey's Bedouin Hornbook, by Herman Beavers
Exploding the Narrative in Jazz Improvisation, by Vijay Iyer
Beneath the Underground: Exploring New Currents in "Jazz", by Robin D. G. Kelley
, by v

Robert G. O'Meally is Zora Neale Hurston Professor of American Literature at Columbia University. He is the author of numerous books, including The Jazz Cadence of American Culture and Lady Day: The Many Faces of Billie Holiday.Brent Hayes Edwards is an associate professor of English at Rutgers University and the author of The Practice of Diaspora: Literature, Translation, and the Rise of Black Internationalism.Farah Jasmine Griffin is a professor of English, comparative literature, and African American studies at Columbia University. She is the author of If You Can't Be Free, Be a Mystery: In Search of Billie Holiday.