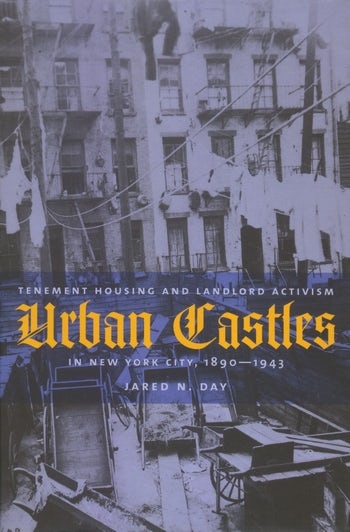 In the first comprehensive investigation of the role of landlords in shaping the urban landscapes of today, Jared Day explores the unique case of New York City from the close of the nineteenth century through the World War II era. During this period, tenement landlords were responsible for designing and shaping America's urban landscapes, building housing for the city's ever-growing industrial workforce. Fueled by the illusion of easy money, entrepreneurs managed their buildings in ways that punished compassion and rewarded neglect—and created some of the most haunting images of urban squalor in American history.

Urban Castles mines a previously uninvestigated body of tenant and landlord newspapers, journals, and real estate records to understand how tenement landlords operated in an era before tenant rights developed into a central issue for urban reformers. Day contends that—perhaps more than any other group of property owners—urban landlords stood upon the very fault lines of class, ethnicity, and race. In contrast to many urban histories set in executive boardrooms and state houses, and which chronicle struggles between large corporations, government officials, and organized labor, this fascinating work deals with the more chaotic world of small-scale entrepreneurs and their frequently antagonistic relationships with their customers—working-class tenants.

Urban Castles is a richly informative chronicle of the dark underbelly of America's emerging welfare state. The neglected side of this important story covered by Day's research says much about the sea changes in landlord-tenant relations and urban policy today.

A well-documented, workmanlike study with a good selection of period photographs. Its major theme, the perpetual low-income housing crisis in Manhattan and landlords' loss of authority, opens up new directions for the study of urban life. Elaine S. Abelson, The Journal of American History

Urban Castles should be read for its methodological contributions to uncovering the politics of everyday market relations and for its conceptual contribution to understanding how social relations are historically depoliticized. It is a rich and suggestive study that helps explain a major transformation in the social relations of twentieth-century American cities. Journal of Social History

[A] worthy study of a neglected area of city building and urban policy. It takes a refreshing look at an obscure, maligned element in New York City's history and restores its voice. Jared Day deserves praise for this courageous reclamation. Joel Schwartz, Business History Review

1. The Growth of Tenement Districts in the Tenement Owner's City
2. Tenement Ownership and Ethnic Enterprise in New York City
3. Landlord Activism in the Early Twentieth Century
4. Rent Strikes and the Landlord's "Reign of Terror"
5. Shades of Activism During the Red Scare
6. Landlords in the Tenant's Court
7. The Depression and the Decline of Amateur Tenement Operators
Conclusion: The Tenant City

Jared N. Day is a research fellow at the Center for the Study and Improvement of Regulation in Carnegie Mellon's department of engineering and public policy and is also a historical consultant on urban and environmental issues.