Weighing the Evidence: Who Killed Gandhi?

Annotated and edited by Teesta Setalvad 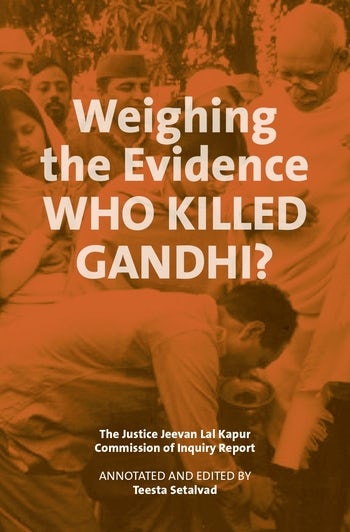 Weighing the Evidence: Who Killed Gandhi?

Annotated and edited by Teesta Setalvad

This volume edited and introduced by Teesta Setalvad brings to light the report of the Kapur Commission which was appointed by the Government of India in 1965 to examine the depth and scope of the conspiracy that lay behind the killing of Gandhi. This three-volume report has been absent from the public domain though it contains invaluable evidence—intelligence reports, oral and documentary evidence—of the extent of complicity behind the hate-driven conspiracy that resulted in the Mahatma’s killing.

On November 12, 1964, at a programme organized in Pune, Dr G.V. Ketkar, the grandson of Bal Gangadhar Tilak, disclosed that six months before the actual criminal act, Nathuram Godse had disclosed his intentions to kill Gandhi. This information was passed on by him via others to the Chief Minister of the then Bombay state, B.G. Kher. Not only was Ketkar arrested but a furore ensued in the Maharashtra State Assembly and the Indian Parliament. In 1965, the Government of India set up a Commission of Inquiry into the Conspiracy to Murder Mahatma Gandhi, headed by Justice Jeevan Lal Kapur, a former judge of the Supreme Court. The commission examined evidence not produced during the trial.

Justice Kapur concluded that the facts taken together undermined ‘any theory other than the conspiracy to murder senior leaders’ by functionaries of supremacist organizations like the Hindu Mahasabha and those closely allied to them.

Teesta Setalvad is a senior journalist, educationist and activist. She has worked extensively on exclusion and communalization in school curricula and textbooks.