The Strange New Fossils Challenging Everything We Thought We Knew 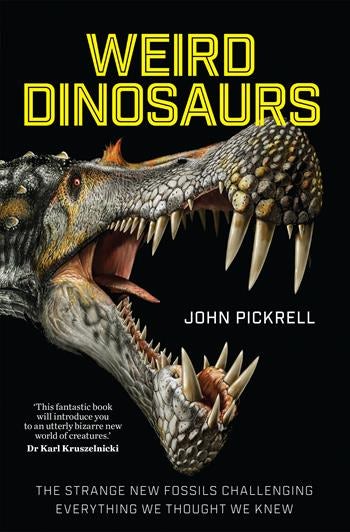 The Strange New Fossils Challenging Everything We Thought We Knew

From the outback of Australia to the Gobi Desert of Mongolia and the savanna of Madagascar, the award-winning science writer and dinosaur enthusiast John Pickrell embarks on a world tour of new finds, meeting the fossil hunters who work at the frontier of discovery. He reveals the dwarf dinosaurs unearthed by an eccentric Transylvanian baron; an aquatic, crocodile-snouted carnivore bigger than T. rex that once lurked in North African waterways; a Chinese dinosaur with wings like a bat; and a Patagonian sauropod so enormous it weighed more than two commercial jet airliners.

Other surprising discoveries hail from Alaska, Siberia, Canada, Burma, and South Africa. Why did dinosaurs grow so huge? How did they spread across the world? Did they all have feathers? What do sauropods have in common with 1950s vacuum cleaners? The stuff of adventure movies and scientific revolutions, Weird Dinosaurs examines the latest breakthroughs and new technologies that are radically transforming our understanding of the distant past. Pickrell opens a vivid portal to a brand-new age of fossil discovery, in which fossil hunters are routinely redefining what we know and how we think about prehistory's most iconic and fascinating creatures.

This history of the discovery of some of the most outlandish creatures that ever lived, and the excitement of paleontological research, will be sure to both entertain and instruct. No other such historical narrative exists that is focused on weird extinct beasts. Spencer Lucas, author of Dinosaurs: The Textbook, sixth edition

In the 26 years since Jurassic Park was released we have unearthed about 75 per cent of all known dinosaur species.... Weird Dinosaurs is a tour de force through the latest digs across the planet. It features the amazing people unearthing new fossils and highlights the odd reptiles that roamed all corners of the earth millions of years ago. Marcus Strom, Sydney Morning Herald

Australian Geographic editor John Pickrell brings us up to date with Weird Dinosaurs, using the species' often bizarre features as a giddy hook. Some had bat-like wings, some had elaborate neck frills, others shock with how large (or small) they were. Pickrell spends a lot of time on quests of individual fossil hunters and he shifts the focus from traditional fossil destinations such as North America to current hotspots China, Mongolia and Antarctica. Doug Wallen, The Big Issue, Australia

Weird Dinosaurs is an informative and entertaining text with a nice blend of narrative and scientific fact... the facts and information included are simply fascinating. Sharon the Librarian

Packed with new knowledge and strange stories about recent finds that few readers will have heard before.

John Pickrell is an award-winning journalist, the editor of Australian Geographic magazine, and the author of Flying Dinosaurs: How Fearsome Reptiles Became Birds (Columbia, 2014). He has worked in London, Washington, D.C., and Sydney for publications including New Scientist, Science, Science News, and Cosmos. His articles can also be found online and in print at BBC Wildlife, National Geographic, Scientific American, Focus, and the ABC. He studied biology at Imperial College in the United Kingdom and at the Natural History Museum, London.