What Is a Nation? and Other Political Writings 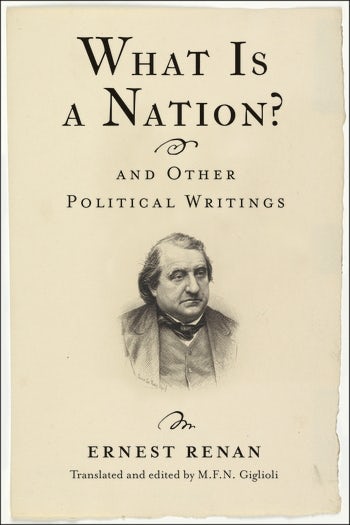 What Is a Nation? and Other Political Writings

Ernest Renan was one of the leading lights of the Parisian intellectual scene in the second half of the nineteenth century. A philologist, historian, and biblical scholar, he was a prominent voice of French liberalism and secularism. Today most familiar in the English-speaking world for his 1882 lecture “What Is a Nation?” and its definition of a nation as an “everyday plebiscite,” Renan was a major figure in the debates surrounding the Franco-Prussian War, the Paris Commune, and the birth of the Third Republic and had a profound influence on thinkers across the political spectrum who grappled with the problem of authority and social organization in the new world wrought by the forces of modernization.

What Is a Nation? and Other Political Writings is the first English-language anthology of Renan’s political thought. Offering a broad selection of Renan’s writings from several periods of his public life, most previously untranslated, it restores Renan to his place as one of France’s major liberal thinkers and gives vital critical context to his views on nationalism. The anthology illuminates the characteristics that distinguished nineteenth-century French liberalism from its English and American counterparts as well as the more controversial parts of Renan’s legacy, including his analysis of colonial expansion, his views on Islam and Judaism, and the role of race in his thought. The volume contains a critical introduction to Renan’s life and work as well as detailed annotations that assist in recovering the wealth and complexity of his thought.

This wonderfully translated and edited collection offers a welcome opportunity to reassess the political writings of Ernest Renan. M.F.N. Giglioli’s judicious selection of essays allows readers to explore how this influential nineteenth-century liberal understood the major challenges of his day: empire, religion, education, and liberty. A principled mind in an era of revolutionaries and demagogues, Renan inspires reflection on the place of intellectual and political engagement in turbulent times. J.P. Daughton, Stanford University

This welcome volume makes the political thought of a major figure in the liberal tradition accessible to English readers for the first time. Setting Renan's famous lecture 'What Is a Nation?' alongside a series of previously untranslated essays on diverse subjects from Islamic science to the future of Europe to the nature of historical causation, the volume shows Renan grappling with the many legacies of the French Revolution for the modern world. Giglioli's translations are lucid, reliable, and a pleasure to read. His informative and judicious introduction traces the considerable impact of Renan's controversial ideas—about race, religion, civilization, and reform—on thinkers from left to right in subsequent generations. Jennifer Pitts, University of Chicago

Renan was one of the most significant liberal thinkers in nineteenth-century France. His occasional essays and lectures constituted major interventions in, and helped set the tone of, public debate. What Is a Nation? and Other Political Writings makes a fundamental contribution in bringing to the English reader a variety of Renan’s texts which are either unavailable or dispersed, supported by an excellent introduction and supplemented by highly useful explanatory notes. Robert D. Priest, Royal Holloway, University of London

Ernest Renan (1823–1892) was a French scholar of the Ancient Near East and early Christianity, best known for The Life of Jesus (1862), an international best seller, and his views on national identity.

M. F. N. Giglioli is a research fellow in the Department of Political and Social Sciences at the University of Bologna. He is the author of Legitimacy and Revolution in a Society of Masses: Max Weber, Antonio Gramsci, and the Fin-de-Siècle Debate on Social Order (2013).