Everyday Encounters with the Socialist Past in Germany 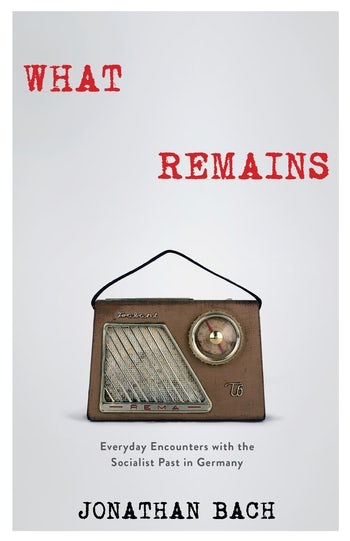 Everyday Encounters with the Socialist Past in Germany

What happens when an entire modern state's material culture becomes abruptly obsolete? How do ordinary people encounter what remains? In this ethnography, Jonathan Bach examines the afterlife of East Germany following the fall of the Berlin Wall, as things and places from that vanished socialist past continue to circulate and shape the politics of memory.

What Remains traces the unsettling effects of these unmoored artifacts on the German present, arguing for a rethinking of the role of the everyday as a site of reckoning with difficult pasts. Bach juxtaposes four sites where the stakes of the everyday appear: products commodified as nostalgia, amateur museums dedicated to collecting everyday life under socialism, the "people's palace" that captured the national imagination through its destruction, and the feared and fetishized Berlin Wall. Moving from the local, the intimate, and the small to the national, the impersonal, and the large, this book's interpenetrating chapters show the unexpected social and political force of the ordinary in the production of memory. What Remains offers a unique vantage point on the workings of the everyday in situations of radical discontinuity, contributing to new understandings of postsocialism and the intricate intersection of material remains and memory.

In this wonderful book, Jonathan Bach shows the complexity of East Germans' adjustment to their new reality. Examining preferred consumption items, personal museums of things from the past, demolitions and rebuildings, and memorializations of the Wall, he goes well beyond fashionable invocations of "nostalgia" to explore unification's assaults on personhood and identity, on senses of place and history. A must read! Katherine Verdery, the Graduate Center of the City University of New York

What Remains is a perceptive and—perhaps more crucially—a very sympathetic account of multiple ways through which ordinary people try to take hold of their politically controversial past. Bach creates an intricate but highly accessible story about the past that is not quite gone. Serguei Oushakine, Princeton University

Jonathan Bach weaves his way elegantly and insightfully through Berlin’s postunification landscape, highlighting the absences, unsettlements, and inheritances from the past. In doing so, he shows not only the potency of what remains but also the creativity with which it is addressed and new futures forged. This is a wonderful, highly readable, yet deeply sophisticated book. Sharon Macdonald, Institut für Europäische Ethnologie, Humboldt-Universität zu Berlin

What Remains traces a quarter century of present pasts—a minefield of forced dispossessions and reappropriations in the struggles of forging German unification. It offers a vibrant encounter with the residues of Germany’s first socialist state and concludes with a moving tribute to a current generation of Nachgeborenen haunted by the failures and the promises of the past. Andreas Huyssen, Columbia University

[What Remains] weaves together theories of representation, time, and memory to examine the complicated legacy of East Germany’s material culture. . . . Highly recommended. Choice

Jonathan Bach’s superb analysis of how state and non-state actors make sense of, display, and appropriate the material remains of the GDR in What Remains: Everyday Encounters with the Socialist Past in Germany could not be more timely. His careful attention to materials that became obsolete almost overnight — consumer goods, the Berlin Wall, the “People’s Palace” — has enormous relevance for the pressing questions regarding the schism(s) in German memory. Benjamin Nienass, Public Seminar

Jonathan Bach makes an important contribution to the scholarship on the politics of memory in Germany. . . . Eloquently but accessibly written, with expert translations of sometimes very difficult-to-translate German terms. . . . This book illustrates the importance of delving deeply into everyday culture in order to develop a sophisticated understanding of politics. Jenny Wüstenberg, Perspectives on Politics

This study in material culture succeeds in walking us through, at times literally, what reads like a magical landscape in which the trash, desiderata, and fragments of yesteryear . . . become visual feasts and official memories. . . . Thought-provoking . . . refreshing and incisive. Andrew Lass, American Anthropologist

This highly readable account weaves together public and private, the big and the small, to offer a fresh take on the politics of memory in united Germany. . . . As an insightful, innovative take on this important topic, What Remains is likely to endure. Kyrill Kunakhovich, German Studies Review

Bach’s book takes the reader on a dazzling journey through selective aspects of the German past and present. It dwells little on the study of political agents and organizational structures, and perhaps because, and not in spite, of that, it makes for stimulating material and a highly recommended reading. Lutz Kaelber, American Journal of Sociology

Insightful, original, beautifully written, and richly illustrated with documentary photographs...The book will be of interest for memory-studies scholars, as well as social scientists taking the role of material culture in social processes seriously. Contemporary Sociology

Jonathan Bach is professor of global studies at the New School. He is author of Between Sovereignty and Integration: German Foreign Policy and National Identity After 1989 (1999) and coeditor of Learning from Shenzhen: China’s Post-Mao Experiment from Special Zone to Model City (2017).