How Contemporary Perpetrators Rationalize What They Do 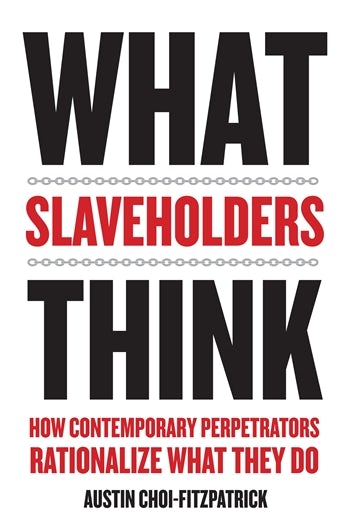 How Contemporary Perpetrators Rationalize What They Do

Drawing on fifteen years of work in the antislavery movement, Austin Choi-Fitzpatrick examines the systematic oppression of men, women, and children in rural India and asks: How do contemporary slaveholders rationalize the subjugation of other human beings, and how do they respond when their power is threatened? More than a billion dollars have been spent on antislavery efforts, yet the practice persists. Why? Unpacking what slaveholders think about emancipation is critical for scholars and policy makers who want to understand the broader context, especially as seen by the powerful. Insight into those moments when the powerful either double down or back off provides a sobering counterbalance to scholarship on popular struggle.

Through frank and unprecedented conversations with slaveholders, Choi-Fitzpatrick reveals the condescending and paternalistic thought processes that blind them. While they understand they are exploiting workers' vulnerabilities, slaveholders also feel they are doing workers a favor, often taking pride in this relationship. And when the victims share this perspective, their emancipation is harder to secure, driving some in the antislavery movement to ask why slaves fear freedom. The answer, Choi-Fitzpatrick convincingly argues, lies in the power relationship. Whether slaveholders recoil at their past behavior or plot a return to power, Choi-Fitzpatrick zeroes in on the relational dynamics of their self-assessment, unpacking what happens next. Incorporating the experiences of such pivotal actors into antislavery research is an immensely important step toward crafting effective antislavery policies and intervention. It also contributes to scholarship on social change, social movements, and the realization of human rights.

A much-needed and unique work. Our understanding of modern slavery holds virtually nothing on slaveholders. Such a study has always been seen as the Holy Grail, truly critical knowledge if we are to move forward, but always outside our ability to grasp. Austin Choi-Fitzpatrick also goes somewhere that few scholars in this area have gone—raising important, challenging questions about how slaveholders might be understood and rehabilitated. Kevin Bales, cofounder of Free the Slaves

The exponential growth of social movement studies has yielded a rich and varied portrait of movements and movement groups. By contrast, we know little about movement targets. In this important book, Choi-Fitzpatrick not only reverses this emphasis, but offers the beginnings of a theory of how targets respond to movement pressure. And what is the data on which his theory is based? Nothing less than in-depth interviews with slaveholders targeted by contemporary anti-slavery groups. It would be hard to imagine a more original or significant contribution to the field than What Slaveholders Think. Doug McAdam, Stanford University

Choi-Fitzpatrick reinvigorates the theory and practice of representing slavery and related systems of domination, in particular our understandings of the binaries between slavery and freedom, victims and perpetrators. Incisive and stimulating, this is a stellar work of scholarship that demands of the academy—and human rights campaigners—a marked shift in direction. Zoe Trodd, University of Nottingham

The book offers a detailed account and analysis of how and to what extent perpetrators adapt, accommodate, and profit from this social phenomenon. Moreover, What Slaveholders Think makes a great contribution to the literature on social movements, human rights, political sociology, labor movements, and other fields of study. American Journal of Sociology

Provides readers with many truly unique and largely overlooked insights into the world of contemporary slavery. . . . Path-breaking. International Sociology

A rich treatment of a compelling (albeit troubling) topic, one that makes an important contribution to social movement theory. Mobilization

A rich, theoretically interesting work that should be taken seriously by scholars of social movement activity. . . . Well-written, engaging, and theoretically insightful. Contemporary Sociology

Choi-Fitzpatrick’s work is an essential contribution to the literature on slavery and bonded labor. Journal of Human Trafficking

Acknowledgments
1. In All Its Forms: Slavery and Abolition, Movements and Targets
2. Best-Laid Plans: A Partial Theory of Social-Movement Targets
3. Just Like Family: Slaveholders on Slavery
4. As If We Are Equal: Slaveholders on Emancipation
5. The Farmer in the Middle: Target Response to Threats
6. Private Wrongs: Slavery and Antislavery in Contemporary India
7. Long Goodbye: The Contemporary Antislavery Movement
8. Between Good and Evil: The Everyday Ethics of Resources and Reappraisal
Notes
References
Index

Austin Choi-Fitzpatrick is associate professor of political sociology at the Joan B. Kroc School of Peace Studies at the University of San Diego and concurrent associate professor of social movements and human rights at the University of Nottingham’s Rights Lab and School of Sociology and Social Policy. He is the coeditor of From Human Trafficking to Human Rights: Reframing Contemporary Slavery (2012), and his work has appeared in the Journal of Human Rights, Social Movement Studies, the Columbia Journal of International Affairs, Social Problems, and the Journal for the Theory of Social Behavior. All royalties from this book will be donated by the author to Free the Slaves and Anti-Slavery International.