What's the Use of Truth? 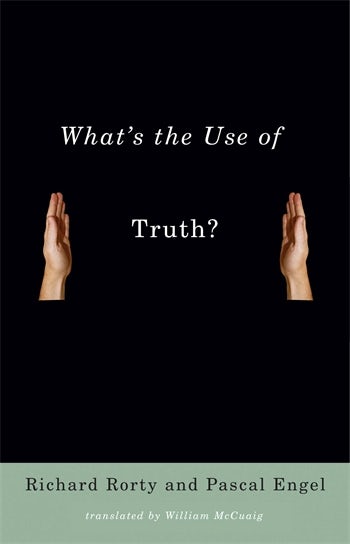 What's the Use of Truth?

What is truth? What value should we see in or attribute to it?

The war over the meaning and utility of truth is at the center of contemporary philosophical debate, and its arguments have rocked the foundations of philosophical practice. In this book, the American pragmatist Richard Rorty and the French analytic philosopher Pascal Engel present their radically different perspectives on truth and its correspondence to reality.

Rorty doubts that the notion of truth can be of any practical use and points to the preconceptions that lie behind truth in both the intellectual and social spheres. Engel prefers a realist conception, defending the relevance and value of truth as a norm of belief and inquiry in both science and the public domain. Rorty finds more danger in using the notion of truth than in getting rid of it. Engel thinks it is important to hold on to the idea that truth is an accurate representation of reality.

In Rorty's view, epistemology is an artificial construct meant to restore a function to philosophy usurped by the success of empirical science. Epistemology and ontology are false problems, and with their demise goes the Cartesian dualism of subject and object and the ancient problematic of appearance and reality. Conventional "philosophical problems," Rorty asserts, are just symptoms of the professionalism that has disfigured the discipline since the time of Kant. Engel, however, is by no means as complacent as Rorty in heralding the "end of truth," and he wages a fierce campaign against the "veriphobes" who deny its value.

What's the Use of Truth? is a rare opportunity to experience each side of this impassioned debate clearly and concisely. It is a subject that has profound implications not only for philosophical inquiry but also for the future study of all aspects of our culture.

Poses and admirably responds to questions which have a direct bearing on my view of existence. The Voice Magazine

Richard Rorty (1931–2007) was professor of comparative literature and philosophy at Stanford University. His Columbia University Press books include An Ethics for Today: Finding Common Ground Between Philosophy and Religion (2010) and The Future of Religion (2005).

Pascal Engel is ordinary professor of contemporary philosophy at the University of Geneva and has taught at the Sorbonne. He is the author of Truth (2014) and The Norm of Truth (1991).

William McCuaig is a translator living in Montreal.