When the Invasion of Land Failed

The Legacy of the Devonian Extinctions 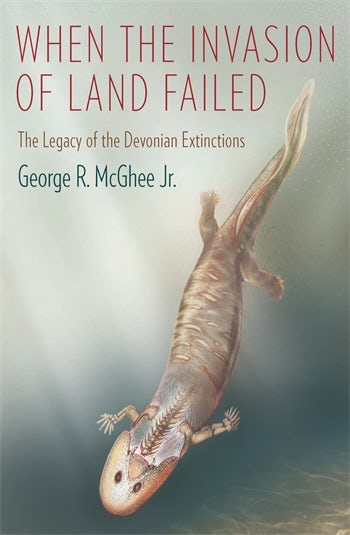 When the Invasion of Land Failed

The Legacy of the Devonian Extinctions

The invasion of land by ocean-dwelling plants and animals was one of the most revolutionary events in the evolution of life on Earth, yet the animal invasion almost failed—twice—because of the twin mass extinctions of the Late Devonian Epoch. Some 359 to 375 million years ago, these catastrophic events dealt our ancestors a blow that almost drove them back into the sea. If those extinctions had been just a bit more severe, spiders and insects—instead of vertebrates—might have become the ecologically dominant forms of animal life on land.

This book examines the profound evolutionary consequences of the Late Devonian extinctions and the various theories proposed to explain their occurrence. Only one group of four-limbed vertebrates exists on Earth, while other tetrapod-like fishes are extinct. This gap is why the idea of "fish with feet" seems so peculiar to us, yet such animals were once a vital part of our world, and if the Devonian extinctions had not happened, members of these species, like the famous Acanthostega and Ichthyostega, might have continued to live in our rivers and lakes. Synthesizing decades of research and including a wealth of new discoveries, this accessible, comprehensive text explores the causes of the Devonian extinctions, the reasons vertebrates were so severely affected, and the potential evolution of the modern world if the extinctions had never taken place.

McGhee is able to organize a vast literature into a coherent evolutionary story that is quite unique. From the origin of plants and animals through the Devonian era, this book is a marvelous read. It is important for a wide variety of geologists and biologists and for any readers interested in paleontology and environmental change. Peter Sheehan, curator, Milwaukee Public Museum

Read the introduction, "The Evolution of Life on Land"