James B. Twitchell. With photographs by Ken Ross 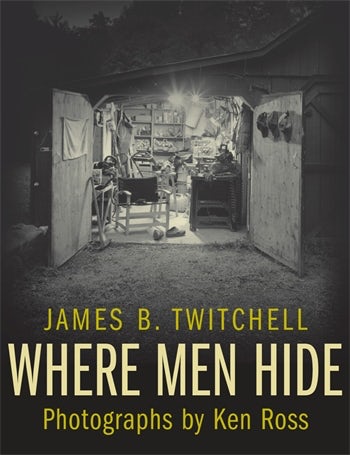 James B. Twitchell. With photographs by Ken Ross

"If you ask men if they spend any time hiding, they usually look at you as if you're nuts. 'What, me hide?' But if you ask women whether men hide, they immediately know what you mean."—from Where Men Hide

Where Men Hide is a spirited tour of the dark and often dirty places men go to find comfort, camaraderie, relaxation, and escape. Ken Ross's striking photographs and James Twitchell's lively analysis trace the evolution of these virtual caves, and question why they are rapidly disappearing.

Ross documents both traditional and contemporary male haunts, such as bars, barbershops, lodges, pool halls, strip clubs, garages, deer camps, megachurches, the basement Barcalounger, and Twitchell examines their provenance, purpose, and appeal. He finds that for centuries men have met with each other in underground lairs and clubhouses to conduct business or, in the case of strip clubs and the modern rec room, to bond and indulge in shady entertainments. In these secret dens, certain rules are abandoned while others are obeyed. However, Twitchell sees this less as exclusionary behavior and more as the result of social anxiety: when women want to get together, they just do it; when men get together, it's a production.

Drawing on literary, historical, and pop cultural sources, Twitchell connects the places men hide with figures like Hemingway and Huck Finn, Frederick Jackson Turner's theory of the American frontier, and the mythological interpretations of Joseph Campbell and Robert Bly. Instead of blaming the disappearance of the man-cave solely on feminism, simple fair play, or the demands of Title IX, Twitchell believes this evaporation is due as well to the rise of solitary pursuits such as driving, watching television, and playing videogames.

By blending together anecdote, research, and keen observation, Ross and Twitchell bring this little-discussed and controversial phenomenon to light.

For men who like to think about manhood... and women who are wondering what the attraction is of that grimy garage. Publishers Weekly

Readers will find much to enjoy. Library Journal

Carefully composed to capture what might be called the aesthetic of male clutter. Mike Seely, Seattle Weekly

By blending anecdote, research and keen observation, the author and photographer bring this little-discussed and controversial phenomenon to light. menstuff.com

What Joseph Campbell did for mythology, Twitchell and Ross have done for garages, strip clubs and other masculine hideouts. Finn-Olaf Jones, Forbes Life

Twitchell describes, informs, explains, analyzes, and enlightens... In Twitchell's book I can see myself and men I know. David Maloof, Boston Sunday Globe

Twitchell explores what it means to be male. US Airways Magazine

Arguing passionately for the continued importance of male bonding and of certain places where no girls are allowed. Brilliant Magazine

Any library strong in sociology... will find this an important acquisition. The Midwest Book review

Introduction
Photographer's Note
1. The Deer Camp: The Hunt
2. The Boxing Ring: Shame and Honor
3. The Fraternal Lodge: Initiation of Brotherhood
4. The Snuggery: Fathers, Sons, and Trains
5. A Room of His Own: Two of Man's Best Friends
6. The Garage: Car and Calendar
7. The American Barbershop: "Next Gentleman"
8. The Baseball Dugout: Chew, Spit, and Fight
9. Getting Outta Here: My Wheels, My Self
10. The Recliner Chair: Hiding in Plain Sight
11. Strip Clubs: Hiding Behind the Ogle
12. "Aah lurve this place": The Male Way of Eating
13. The Workshop Warren: Hammer Time
14. On the Job: Hiding Out in the Office
15. Male Bonding for God
Conclusion
Works Cited

Read an >excerpt from the introduction to Where Men Hide. (pdf)

James B. Twitchell is professor of English and advertising at the University of Florida and author of many books, including Adcult USA and Lead Us Into Temptation. He is also the author of 20 Ads That Shook the World, For Shame, and Branded Nation. Ken Ross has been a fine art photographer and educator for over thirty years. His photography has been displayed in numerous exhibits and featured in the New York Times and Esquire magazine. He has been awarded a Geraldine R. Dodge Foundation Grant and a New Jersey Artist Fellowship for the photographs seen in Where Men Hide.