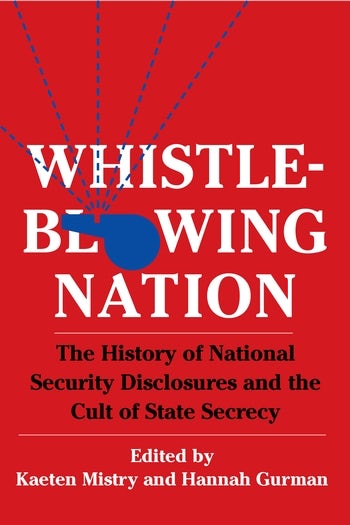 The twenty-first century witnessed a new age of whistleblowing in the United States. Disclosures by Chelsea Manning, Edward Snowden, and others have stoked heated public debates about the ethics of exposing institutional secrets, with roots in a longer history of state insiders revealing privileged information. Bringing together contributors from a range of disciplines to consider political, legal, and cultural dimensions, Whistleblowing Nation is a pathbreaking history of national security disclosures and state secrecy from World War I to the present.

The contributors explore the complex politics, motives, and ideologies behind the revelation of state secrets that threaten the status quo, challenging reductive characterizations of whistleblowers as heroes or traitors. They examine the dynamics of state retaliation, political backlash, and civic contests over the legitimacy and significance of the exposure and the whistleblower. The volume considers the growing power of the executive branch and its consequences for First Amendment rights, the protection and prosecution of whistleblowers, and the rise of vast classification and censorship regimes within the national-security state. Featuring analyses from leading historians, literary scholars, legal experts, and political scientists, Whistleblowing Nation sheds new light on the tension of secrecy and transparency, security and civil liberties, and the politics of truth and falsehood.

With democracies under threat and systems of oversight collapsing around the world, whistleblowing has never been more relevant. This book is a crucial resource for understanding a great paradox: how laws are rescued by a few who dare to break them. Edward Snowden

A dazzling collection that could hardly be more timely. Whatever your view of whistleblowers—heroes, traitors, or something in between—reading and reflecting on these essays will give you a far better appreciation of this controversial yet crucially important phenomenon. Andrew Bacevich, author of The Age of Illusions: How America Squandered Its Cold War Victory

As Kaeten Mistry and Hannah Gurman demonstrate in this brilliant and compelling collection, the fates of national security whistleblowing and democracy are linked. These sharply written essays examine the characteristics of whistleblowers, the way secrecy and whistleblowing have changed over time, the interests at stake when the government prosecutes whistleblowers, and much more. Whistleblowing Nation is essential reading on the tensions between government secrecy and the transparency essential in a democracy. Mary L. Dudziak, author of War Time: An Idea, Its History, Its Consequences

The book, with its diverse voices, contains an abundance of valuable and interesting information. The authors examine whistleblowing in all of its complexity while avoiding the temptation to lionize whistleblowers or idealize them. Steven Aftergood, Federation of American Scientists

This is the first major anthology to treat whistleblowing as a historical and cultural phenomenon. The contributors use careful and broad-ranging examinations to detail the post-WWI relationship of the federal censoring apparatus to histories of democracy and democratic assumptions. The volume is extremely enlightening. Andrew Friedman, Haverford College

Kaeten Mistry is senior lecturer in American history at the University of East Anglia. He is the author of The United States, Italy, and the Origins of Cold War: Waging Political Warfare, 1945–1950 (2014) and editor of Reforms, Reflections, and Reappraisals: The CIA and U.S. Foreign Policy Since 1947 (2011).

Hannah Gurman is associate professor at New York University’s Gallatin School of Individualized Study. She is the author of The Dissent Papers: The Voices of Diplomats in the Cold War and Beyond (Columbia, 2012) and editor of A People’s History of Counterinsurgency (2013).