Why Only Art Can Save Us

Aesthetics and the Absence of Emergency 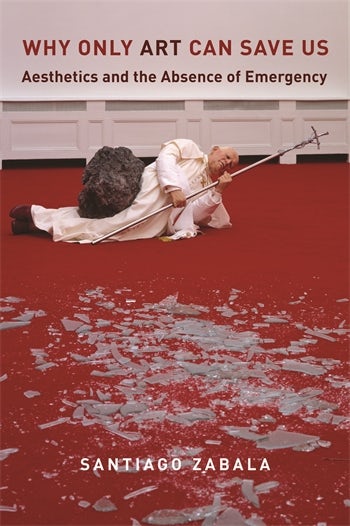 Why Only Art Can Save Us

Aesthetics and the Absence of Emergency

The state of emergency, according to thinkers such as Carl Schmidt, Walter Benjamin, and Giorgio Agamben, is at the heart of any theory of politics. But today the problem is not the crises that we do confront, which are often used by governments to legitimize themselves, but the ones that political realism stops us from recognizing as emergencies, from widespread surveillance to climate change to the systemic shocks of neoliberalism. We need a way of disrupting the existing order that can energize radical democratic action rather than reinforcing the status quo. In this provocative book, Santiago Zabala declares that in an age where the greatest emergency is the absence of emergency, only contemporary art’s capacity to alter reality can save us.

Why Only Art Can Save Us advances a new aesthetics centered on the nature of the emergency that characterizes the twenty-first century. Zabala draws on Martin Heidegger’s distinction between works of art that rescue us from emergency and those that are rescuers into emergency. The former are a means of cultural politics, conservers of the status quo that conceal emergencies; the latter are disruptive events that thrust us into emergencies. Building on Arthur Danto, Jacques Rancière, and Gianni Vattimo, who made aesthetics more responsive to contemporary art, Zabala argues that works of art are not simply a means of elevating consumerism or contemplating beauty but are points of departure to change the world. Radical artists create works that disclose and demand active intervention in ongoing crises. Interpreting works of art that aim to propel us into absent emergencies, Zabala shows how art’s ability to create new realities is fundamental to the politics of radical democracy in the state of emergency that is the present.

Zabala's extraordinary book strikes at the very heart of our spiritual predicament. From austerity politics to security measures, everything is legitimized with the axiom that we live in a state of emergency. The first task of the critique of ideology today is thus to dispel this myth of emergency—something that Zabala does brilliantly, combining theoretical stringency with immense readability. Slavoj Žižek, author of Less Than Nothing and Absolute Recoil

Why is the absence of emergency the greatest emergency? This question is at the heart of Zabala's new book, which develops further his "ontology of remnants," i.e., what remains of Being in the twenty-first century. Art, like communism, is not an aesthetic or political subject matter for Zabala but rather an ontological event where Being emerges as remnants. This is why instead of aesthetic contemplation he calls for existential interventions meant to change the world. The art world, as well as the philosophical community, will benefit from Zabala's best book so far. Gianni Vattimo, author of Art's Claim to Truth and Of Reality

Santiago Zabala's Why Only Art Can Save Us is a crucial publication for anyone concerned about the future and necessity of art in the twenty-first century. Its main claim is that the possibility of art lies in its aesthetics of emergency. Although we live in a time of social, political, and environmental emergencies, Zabala makes the convincing case that we tend to repress the emergencies we live in. The aesthetics of emergency discloses the concealment of emergency as the essential emergency, helping us to recover the sense of emergency. This aesthetics proposes a major shift in our understanding of art, which is less about representation than existence. Christine Ross, author of The Past Is the Present; It’s the Future Too: The Temporal Turn in Contemporary Art and The Aesthetics of Disengagement: Contemporary Art and Depression

Santiago Zabala's new book is a timely and provocative exploration of art in the age of emergency. Today, the real emergency we face is not so much the populist emergencies of media spectacles that confront us ad nauseum day in and day out; rather, it is the emergency that arises from concealing the destruction and oppression that neoliberal democracy, militarism, and global capitalism inflict. It is here where art can save us. Why Only Art Can Save Us is a major contribution to political philosophy and the philosophy of art. Adrian Parr, author of Birth of a New Earth and The Wrath of Capital

Why Only Art Can Save Us examines art that is in touch with the contemporary world, a world that, however you assess such things, is surely in crisis. Los Angeles Review of Books

Santiago Zabala has written a profound and important work that responds to some of the most demanding issues of our day. Singapore Review of Books

Santiago Zabala is ICREA Research Professor of Philosophy at the Pompeu Fabra University in Barcelona. He is the author of The Hermeneutic Nature of Analytic Philosophy: A Study of Ernst Tugendhat (Columbia, 2008); The Remains of Being: Hermeneutic Ontology After Metaphysics (Columbia, 2009); and (with Gianni Vattimo) Hermeneutic Communism: From Heidegger to Marx (Columbia, 2011), and the editor of several of Vattimo's books, including Nihilism and Emancipation: Ethics, Politics, and Law (2004); The Future of Religion (2005, with Richard Rorty); and Art's Claim to Truth (2008), all from Columbia University Press. He also writes opinion articles for publications including the New York Times, Al Jazeera, and the Los Angeles Review of Books.