Why This New Race 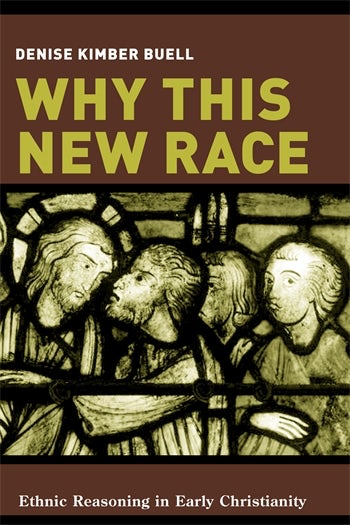 Why This New Race

Why This New Race offers a radical new way of thinking about the origins of Christian identity. Conventional histories have understood Christianity as a religion that from its beginnings sought to transcend ethnic and racial distinctions. Denise Kimber Buell challenges this view by revealing the centrality of ethnicity and race in early definitions of Christianity. Buell's readings of various texts consider the use of "ethnic reasoning" to depict Christianness as more than a set of shared religious practices and beliefs. By asking themselves, "Why this new race?" Christians positioned themselves as members of an ethnos or genos distinct from Jews, Romans, and Greeks.

Buell focuses on texts written before Christianity became legal in 313 C.E., including Greek apologetic treatises, martyr narratives, and works by Clement of Alexandria, Origen, and Tertullian. Philosophers and theologians used ethnic reasoning to define Christians as a distinct people within classical and ancient Near East society and in intra-Christian debates about what constituted Christianness. Many characterized Christianness as both fixed and fluid-it had a real essence (fixed) but could be acquired through conversion (fluid). Buell demonstrates how this dynamic view of race and ethnicity allowed Christians to establish boundaries around the meaning of Christianness and to develop universalizing claims that all should join the Christian people.

In addressing questions of historiography, Buell analyzes why generations of scholars have refused to acknowledge ethnic reasoning in early Christian discourses. Moreover, Buell's arguments about the importance of ethnicity and religion in early Christianity provide insights into the historical legacy of Christian anti-Semitism as well as contemporary issues of race.

For those who insist on historical depth and nuance...Buell's book is the place to begin that engagement. Karen L. King, Harvard Divinity Bulletin

An invaluable resource... the topic is timely for the Church and the work itself is thoroughly researched. Stephanie Buckhanon Crowder, Interpretation: A Journal of Bible and Theology

An important book. Stanley Stowers, Journal of the American Academy of Religion

List of Abbreviations
Preface
Introduction
1. "Worshippers of So-Called Gods, Jews, and Christians": Religion in Ethnoracial Discourses
2. "We Were Before the Foundation of the World": Appeals to the Past in Early Christian Self-Definition
3. "We, Quarried from the Bowels of Christ, Are the True Genos of Israel": Christian Claims to Peoplehood
4. "A Genos Saved by Nature": Ethnic Reasoning as Intra-Christian Polemic
5. "From Every Race of Humans": Ethnic Reasoning, Conversion, and Christian Universalism
Epilogue
Notes
Bibliography
Index of Ancient Sources
General Index