With Dogs at the Edge of Life 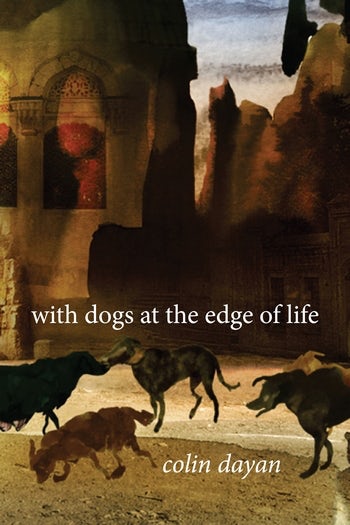 With Dogs at the Edge of Life

In this original and provocative book, Colin Dayan tackles head-on the inexhaustible world, at once tender and fierce, of dogs and humans. We follow the tracks of dogs in the bayous of Louisiana, the streets of Istanbul, and the humane societies of the United States, and in the memories and myths of the humans who love them. Dayan reorients our ethical and political assumptions through a trans-species engagement that risks as much as it promises. She makes a powerful case for questioning what we think of as our deepest-held beliefs and, with dogs in the lead, unsettles the dubious promises of liberal humanism.

Moving seamlessly between memoir, case law, and film, Dayan takes politics and animal studies in a new direction—one that gives us glimpses of how we can think beyond ourselves and with other beings. Her unconventional perspective raises hard questions and renews what it means for any animal or human to live in the twenty-first century. Nothing less than a challenge for us to confront violence and suffering even in the privileged precincts of modernity, this searing and lyrical book calls for another way to think the world. Theoretically sophisticated yet aimed at a broad readership, With Dogs at the Edge of Life illuminates how dogs—and their struggles—take us beyond sentimentality and into a form of thought that can make a difference to our lives.

In three lively and beautifully written movements, Colin Dayan offers a memorable tour de force that threads together memoir and an analysis of the deprivations of life, human and nonhuman and human with nonhuman, that so pervasively characterize our neoliberal world-historical moment. Intelligent and moving, With Dogs at the Edge of Life is an extraordinary book, a courageous and compelling intermingling of arresting cultural critique and autobiographical reflections of a life lived in the company of canines. David L. Clark, McMaster University

Colin Dayan has again produced a probing and brilliant examination of that long 'history of extermination masked by the veneer of enlightenment.' Always writing with justice in mind, Dayan's consideration of our relationship with dogs yields a complex meditation on humanity and life's uncertain possibilities. Beautiful, 'more than just another dog story,' as only Dayan could write it. Avery F. Gordon, University of California, Santa Barbara

Whether openly acknowledged or not, we are all in relationships with dogs—as companions, as lovers, as protector and protected. Some relationships are marked by fear, perhaps hatred. Most are contradictory, many escape description. In her poetic, political, autobiographical homage to life and death with dogs, Dayan helps us stay with them as we traverse treacherous edges. We are fortunate to have so gifted an interpreter and loving a guide. Lori Gruen, author of Entangled Empathy and Ethics and Animals

In an inimitable mode of testimony and confession, Colin Dayan argues that relations with dogs, from the southern United States to Turkey, structure violence, vulnerability, and antagonism. Extending her work on the physical exploration of unnameable states, Dayan shows how bonds with dogs uniquely condition the creation of social value. And I say that as a cat person. Rei Terada, University of California, Irvine

Erudite and imaginative as the book asks why only members of our species get to be persons... Boston Review

Emotionally and intellectually challenging, the volume boasts a rich, resonant message: Not everyone sees the dog the same. American Kennel Club

Dayan has thoroughly researched the events in the book. Her love of pit bulls and dogs in general shines through. She shows us what the true nature of the pitbull is and what some have become in the hands of the wrong type of people. To a dog lover, this is a very heartbreaking volume to read but it illustrates prejudice and the justification people use for their actions. Susan Bulanda, Westminster, Maryland, Quarterly Review of Biology, Vol 92, No 3

With Dogs at the Edge of Life is filled with reports of this kind of senseless destruction of animal life, and for anyone who remotely cares about animals, it is a brutal, if necessary read. In each case, the question arises again and again: in what category do these animals exist? Los Angeles Review of Books

To know life as the dogs know it, even if we can do so only incompletely, is to find, in Dayan's words, 'an anchor in the terror, a place to stand in the chaos.' Nashville Scene

With Dogs at the Edge of Life was one of the most memorable books I've had the chance to read this year. Inside Higher Ed

Colin Dayan is Robert Penn Warren Professor of the Humanities and professor of law at Vanderbilt University. She is the author of The Law Is a White Dog: How Legal Rituals Make and Unmake Persons, The Story of Cruel and Unusual, and Haiti, History, and the Gods. She has also written for the New York Times, London Review of Books, and Boston Review.