With Us and Against Us

How America's Partners Help and Hinder the War on Terror 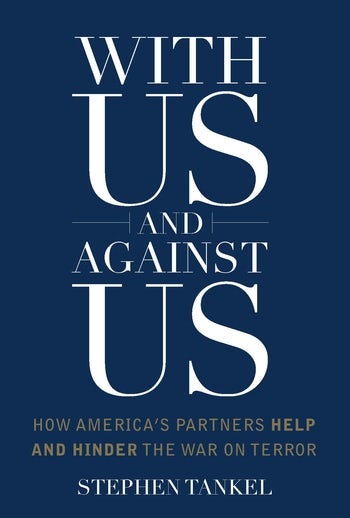 With Us and Against Us

How America's Partners Help and Hinder the War on Terror

In the wake of the September 11 attacks, President George W. Bush drew a line in the sand, saying, “Either you are with us or you are with the terrorists.” Since 9/11, many counterterrorism partners have been both “with” and “against” the United States, helping it in some areas and hindering it in others. This has been especially true in the Middle East, Africa, and South Asia, where the terrorist groups that threaten America are most concentrated. Because so many aspects of U.S. counterterrorism strategy are dependent on international cooperation, the United States has little choice but to work with other countries. Making the most of these partnerships is fundamental to the success of the War on Terror. Yet what the United States can reasonably expect from its counterterrorism partners—and how to get more out of them—remain too little understood.

In With Us and Against Us, Stephen Tankel analyzes the factors that shape counterterrorism cooperation, examining the ways partner nations aid international efforts, as well as the ways they encumber and impede effective action. He considers the changing nature of counterterrorism, exploring how counterterrorism efforts after 9/11 critically differ both from those that existed beforehand and from traditional alliances. Focusing on U.S. partnerships with Algeria, Egypt, Mali, Pakistan, Saudi Arabia and Yemen against al-Qaeda, ISIS, and other terrorist organizations, Tankel offers nuanced propositions about what the U.S. can expect from its counterterrorism partners depending on their political and security interests, threat perceptions, and their relationships with the United States and with the terrorists in question. With Us and Against Us offers a theoretically rich and policy-relevant toolkit for assessing and improving counterterrorism cooperation, devising strategies for mitigating risks, and getting the most out of difficult partnerships.

Working with international partners in the fight against terrorism can be demanding and frustrating. Yet as Stephen Tankel demonstrates in reviewing some of the United States’ most important partnerships, they are also vital. He warns that attempts to combat terrorism without them risks trouble. Lawrence Freedman, author of The Future of War: A History

With Us and Against Us shines a bright light on a notoriously shadowy subject: the cooperation between states and terrorist groups. If there’s anyone qualified to write about the conflicting interests that drive these relationships and the tough trade-offs they entail for U.S. policy makers, it’s Tankel. Will McCants, author of The ISIS Apocalypse: The History, Strategy, and Doomsday Vision of the Islamic State

This book provides the most thorough description and analysis of interstate counterterrorist cooperation, and everything that affects it, from a U.S. point of view. It will serve as a standard reference point in the literature whenever the subject of such cooperation comes up. Tankel convincingly demonstrates that many of the states in question are simultaneously both part of the problem and part of the solution. With Us and Against Us is a serious, careful, and informed treatment of a timely and important topic. Paul R. Pillar, author of Why America Misunderstands the World: National Experience and Roots of Misperception

Working with partners is a vital part of US counterterrorism strategy. Stephen Tankel's book is a major contribution to our understanding of these partnerships, why their record of is often mixed, and how to get more out of them. Peter Bergen, author of United States of Jihad: Who are America's Homegrown Terrorists and How do We Stop Them?

Tankel’s case studies are accessible and comprehensive and succeed in highlighting the challenge of counterterrorism cooperation since 9/11. H-Diplo

The findings explored in With Us and Against Us highlight the need for collaboration in order to tackle international terror threats. Current policy-makers would do well to take heed of the lessons on tackling terrorism that are explored in this book. Gavin Hart, Critical Studies On Terrorism

Preface and Acknowledgments
Introduction
1. Counterterrorism Partnerships in Context
2. America and Its Partners in the War on Terror
3. The Elements of Counterterrorism Cooperation
4. Pakistan: The Paradox
5. Saudi Arabia: Arsonist and Firefighter
6. Yemen: An Unstable Partner
7. Mali: The Weakest Link
8. Egypt and Algeria: The Revolutionary Heartland
Conclusion: Making the Most of Cooperation
Appendix: List of U.S. Counterterror Programs
Notes
Index

Stephen Tankel is associate professor at American University, adjunct senior fellow at the Center for New American Security, and senior editor at War on the Rocks. He has served as a senior advisor at the Department of Defense and is the author of Storming the World Stage: The Story of Lashkar-e-Taiba (2011).