A Verse Comedy in Four Acts 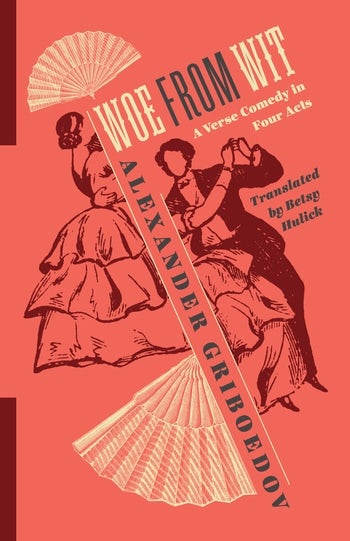 A Verse Comedy in Four Acts

Alexander Griboedov’s Woe from Wit is one of the masterpieces of Russian drama. A verse comedy set in Moscow high society after the Napoleonic wars, it offers sharply drawn characters and clever repartee, mixing meticulously crafted banter and biting social critique. Its protagonist, Alexander Chatsky, is an idealistic ironist, a complex Romantic figure who would be echoed in Russian literature from Pushkin onward. Chatsky returns from three years abroad hoping to rekindle a romance with his childhood sweetheart, Sophie. In the meantime, she has fallen in love with Molchalin, her reactionary father Famusov’s scheming secretary. Chatsky speaks out against the hypocrisy of aristocratic society—and as scandal erupts, he is met with accusations of madness.

Woe from Wit was written in 1823 and was an immediate sensation, but under heavy-handed tsarist censorship, it was not published in full until forty years later. Its influence is felt not just in Russian literary language but in everyday speech. It is the source of a remarkable number of frequently quoted aphorisms and turns of phrase, comparable to Shakespeare’s influence on English. Yet owing to its complex rhyme scheme and verse structure, the play has frequently been considered almost untranslatable. Betsy Hulick’s translation brings Griboedov’s sparkling wit, spirited dialogue, and effortless crossing of registers from elevated to colloquial into a lively contemporary English.

Certain masterpieces seem to defy translation. Griboedov’s scintillating verse comedy of manners, Woe from Wit, is thought to be one of them. Betsy Hulick’s translation comes as close to nullifying that notion as any. It is accurate, sprightly, inventive, and eminently playable. She has captured the sharp characterizations and aphoristic dialogue of the original. Her version deserves to be on the same shelf as Richard Wilbur’s Tartuffe and the Cyrano of Anthony Burgess.

The picture of Russia reflected in Griboedov’s great play in the nineteenth century has been brilliantly realized in Betsy Hulick’s twenty-first century translation. This paradoxically contemporary classic, with its far-seeing themes, will be a welcome contribution to the English speaking stage.

Finally: an eminently stageable translation of Griboedov’s Woe from Wit! The play truly comes to life in English and the dialogue that created so many Russian catchphrases comes through as lively, effortlessly colloquial, and often hilariously funny.

Alexander Griboedov (1795–1829), described by Pushkin as the “cleverest man of his generation,” is best known as the author of Woe from Wit. While serving on a diplomatic mission to Persia in the aftermath of the 1826–1828 Russo-Persian War, he was brutally murdered when a mob assaulted the Russian embassy in Tehran.

Betsy Hulick has translated Russian poets and playwrights, including Pushkin and Chekhov, and her translation of Gogol’s Inspector General was produced on Broadway.