The Many Lives of the Multiverse 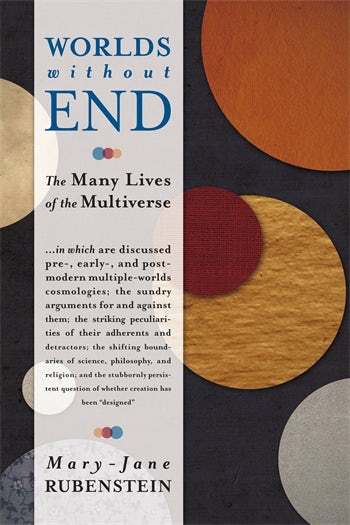 The Many Lives of the Multiverse

"Multiverse" cosmologies imagine our universe as just one of a vast number of others. While this idea has captivated philosophy, religion, and literature for millennia, it is now being considered as a scientific hypothesis—with different models emerging from cosmology, quantum mechanics, and string theory.

Beginning with ancient Atomist and Stoic philosophies, Mary-Jane Rubenstein links contemporary models of the multiverse to their forerunners and explores the reasons for their recent appearance. One concerns the so-called fine-tuning of the universe: nature's constants are so delicately calibrated that it seems they have been set just right to allow life to emerge. For some thinkers, these "fine-tunings" are evidence of the existence of God; for others, however, and for most physicists, "God" is an insufficient scientific explanation.

Hence the allure of the multiverse: if all possible worlds exist somewhere, then like monkeys hammering out Shakespeare, one universe is bound to be suitable for life. Of course, this hypothesis replaces God with an equally baffling article of faith: the existence of universes beyond, before, or after our own, eternally generated yet forever inaccessible to observation or experiment. In their very efforts to sidestep metaphysics, theoretical physicists propose multiverse scenarios that collide with it and even produce counter-theological narratives. Far from invalidating multiverse hypotheses, Rubenstein argues, this interdisciplinary collision actually secures their scientific viability. We may therefore be witnessing a radical reconfiguration of physics, philosophy, and religion in the modern turn to the multiverse.

This is a work that performs the 'many-oneness' of the multiverse, whose history and potentiality it maps. As she traces the startling philosophical depths, mystical ancestry, and scientific shocks of this cosmic boundlessness, Rubenstein's brilliance sparkles like its innumerable stars. Catherine Keller, author of Face of the Deep: A Theology of Becoming

Some physicists suggest that our cosmos has been caught in an endless loop, repeatedly cycling between big bangs since time immemorial. In Worlds Without End, Mary-Jane Rubenstein provides a remarkable tour of how such ideas—and competing ideas about whether our universe is embedded within some larger multiverse—have likewise been cycling throughout Western thought for millennia. This deeply learned excavation is a rare accomplishment: a page-turner that asks large questions about science, philosophy, and religion. Fascinating. David Kaiser, author of How the Hippies Saved Physics: Science, Counterculture, and the Quantum Revival

We are living through a golden age of cosmology, when observations reveal a universe 13.8 billion years big and new theories and new evidence vie with one another almost on a daily basis. Rubenstein is an expert guide to this dramatic scene. Uncovering humorous comparisons with the past, she shows that our golden age is tarnished in only a few ways. We cannot tell which of the many-worlds hypotheses is the right one, whether they exist under an integrated set of laws, and we may never be able to so. Yet the quest continues and produces many profound insights. Rubenstein shows the way scientific worldviews grow from the kind of questions we ask, how metaphysics and physics are mutually entangled, and how the many worlds of her title emerge, again and again over two thousand years, often in spite of their authors' intentions and taste. A witty and mature view of views. Charles Jencks , author of The Garden of Cosmic Speculation

A must read for anyone who is interested in the evolution of human thought about the cosmos. The reader is led through the history of philosophical, religious and scientific ideas and arguments for the existence of many worlds then left to contemplate their own ending to the cosmic story. A beautiful and authoritative description of the struggles and developments of competing ideas about nature for the past three millenia Laura Mersini-Houghton, University of North Carolina at Chapel Hill

Rubenstein's witty, thought-provoking history of philosophy and physics leaves one in awe of just how close Thomas Aquinas and American physicist Steven Weinberg are in spirit as they seek ultimate answers. Publishers Weekly

An excellent starting point for those wishing to go even deeper down the throat of the wormhole. Recommended. CHOICE

If one seeks a scholarly account of the main ideas rather than of the detailed science, then Worlds Without End is excellent. Physics Today

Acknowledgments
Introduction: How to Avoid the G-Word
1. A Single, Complete Whole
2. Ancient Openings of Multiplicity
3. Navigating the Infinite
4. Measuring the Immeasurable
5. Bangs, Bubbles, and Branes: Atomists Versus Stoics, Take Two
6. Ascending to the Ultimate Multiverse
Unendings: On the Entanglement of Science and Religion
Notes
Bibliography
Index

Read the introduction, "How to Avoid the G-Word":

Mary-Jane Rubenstein (PhD, Philosophy of Religion, Columbia) is Professor and Chair of Religion at Wesleyan University. She is the author of Worlds Without End: The Many Lives of the Multiverse (Columbia, 2014) and Strange Wonder: The Closure of Metaphysics and the Opening of Awe (Columbia, 2009) and the coeditor (with Catherine Keller) of Entangled Worlds: Science, Religion, Materiality (Fordham, 2017).