Writings from the Golden Age of Russian Poetry 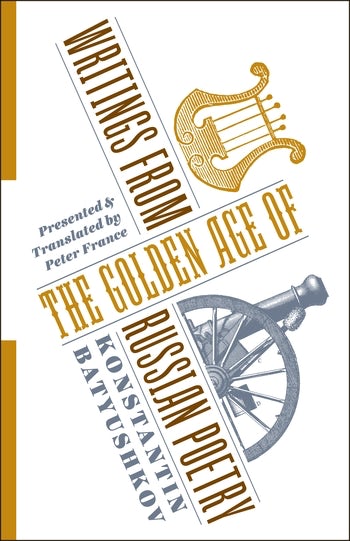 Writings from the Golden Age of Russian Poetry

Konstantin Batyushkov was one of the great poets of the Golden Age of Russian literature in the early nineteenth century. His verses, famous for their musicality, earned him the admiration of Alexander Pushkin and generations of Russian poets to come. In Writings from the Golden Age of Russian Poetry, Peter France interweaves Batyushkov’s life and writings, presenting masterful new translations of his work with the compelling story of Batyushkov’s career as a soldier, diplomat, and poet and his tragic decline into mental illness at the age of thirty-four.

Little known among non-Russian readers, Batyushkov left a varied body of writing, both in verse and in prose, as well as memorable letters to friends. France nests a substantial selection of his sprightly epistles on love, friendship, and social life, his often tragic elegies, and extracts from his essays and letters within episodes of his remarkable life—particularly appropriate for a poet whose motto was “write as you live, and live as you write.” Batyushkov’s writing reflects the transition from the urbane sociability of the Enlightenment to the rebellious sensibility of Pushkin and Lermontov; it spans the Napoleonic Wars and the rapid social and literary change from Catherine the Great to Nicholas I. Presenting Batyushkov’s poetry of feeling and wit alongside his troubled life, Writings from the Golden Age of Russian Poetry makes his verse accessible to English-speaking readers in a necessary exploration of this transitional moment for Russian literature.

For fans of Russian poetry, and especially for Russophone poets, Batyushkov (1787–1855) is a vital figure who wrote exquisite verse and helped to usher in what is known as the Golden Age of Russian poetry. . . . Writings from the Golden Age of Russian Poetry interweaves translations of poetry (plus excerpts from prose essays and personal letters) with history and biography. . . . Poets and general readers should appreciate this volume as much as teachers and scholars who can now quote elegant translations. Sibelan Forrester, Los Angeles Review of Books

Writings From the Golden Age of Russian Poetry by Konstantin Batyushkov is far from a straightforward anthology of poems. It is a biographical essay into which are dispersed more than sixty translations, in whole or in part. (The original Russian is not included.) The reader comes to the poetry by way of the prose. The latter ranging from France’s informative narrative to Batyushkov’s own essays and letters. Jim Kates, The Arts Fuse

[Konstantin Batyushkov] did for the Russian language what Petrarch did for Italian. Alexander Pushkin

Konstantin Batyushkov was one of the great Russian poets of the nineteenth century, and Peter France has done a superlative job in bringing his work to an English-speaking audience. The volume deserves praise for its careful yet mellifluous translations of verse and for a biography that provides a rich cultural and historical context. Michael Wachtel, Princeton University

This selective anthology of Batyushkov’s poetry with commentary by Peter France is a welcome complement to Ilya Z. Serman’s study of the poet’s life and works. Carrol F. Coates, Independent Scholar, Slavic and East European Journal

The translations of shorter poems are often equimetrical and also reproduce rhyme. . . The longer poems are rendered with a grace and clarity that takes them beyond the standard of cribs. Comments on form supplement translation helpfully. Nothing, one imagines, could work better in classes on Russian poetry of the Pushkin period. Slavonic and East European Review

Contents
Preface
Acknowledgments
Abbreviations
Introduction
1. Vologda to St. Petersburg
2. War and Peace
3. The City and the Country
4. Back to War
5. The Return of Odysseus
6. Arzamas and the Essays
7. To Italy
8. Into the Dark
Index

Konstantin Batyushkov (1787-1855) was a celebrated Russian poet and essayist. He served in three campaigns of the Napoleonic wars and was posted to Naples on diplomatic service before succumbing to incurable mental illness in 1822.

Peter France is honorary fellow and professor emeritus at the University of Edinburgh. He has translated French and Russian prose texts as well as the works of many Russian poets, most recently Lermontov, Baratynsky, Mandelstam, and Aygi.